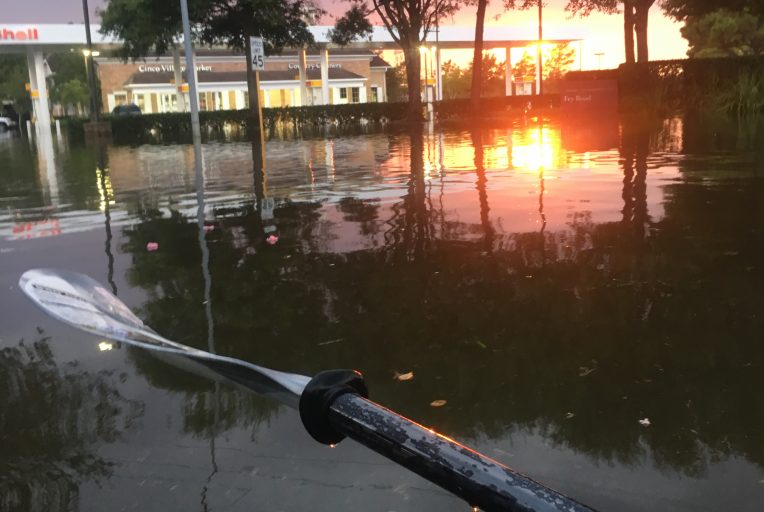 It is a tradition, when embarking on a water vessel’s maiden voyage, to shatter a celebratory (and possibly superstitious) bottle of champagne on her bow.  This was not the case as I dragged my brand new red and black marbled kayak scraping down a concrete sidewalk towards the reeking, toxic floodwaters that had inundated the once beautiful and quiet suburb neighborhood before me.  The water’s edge was at a street intersection where, beyond its stop signs, the roadways had become waterways passable now only by boat.  Down those strange new canals and deep within the neighborhoods they surrounded were people who were trapped in their homes and a handful of civilian responders and frantic families gathered in the intersection, some waiting, some putting their boats into the water and some who maybe didn’t know what to do at all.  It was a quiet, slow chaos, mixed equally with purpose and disorder and the flashing red stoplights down the flooded streets in the distance, were a testament to this as they blinked in confusion, not really understanding their place in all this, but still attempting to retain order.  This was the battleground where Hurricane Harvey and Katy, Texas had met and gone toe to toe; a place where man and nature had met on the most basic of terms and a place where the battle is never won, yet still not lost.

I felt my boots hit mud and I looked down at them, wondering, hoping, that the waterproofing and my knee-high gators would be enough to keep the hellish water out.  I pushed the thought from my mind as I plunged a committed foot into the water and pulled my kayak in with me.  “We got this baby…”
I said to my kayak as I settled into her, the rank water kissing her bow; her first taste of her purpose in this world.  I threw my rescue gear and my waterproof box down at my feet and without a seat to sit in (I had pulled it out for space) pushed shakily against the street curb with the oar and slid silently into the water filled street.  Perhaps a little unsteady at the hands of her operator, but sound and sleek in nature, we instantly became an extension of each other, interdependent in one another’s purpose; I, guiding her with mind and muscle, and her, keeping me afloat, dry and separated from the flood waters that threatened my own well-being… both on the same mission… neither capable without the other.

I thought out loud.  I looked around at the devastated landscape, feeling our purpose surge through me.

I decided, with a bittersweet smile.  I patted lovingly (and maybe superstitiously) her bow and took a deep breath…

As I paddled down the street, the strange chaos of the intersection melted away and an eerie, almost suffocating stillness and silence settled in on the water around me.  The only audible sounds; my breathing, the oar dipping into the water and the hushed lapping of h-2-oh-my-god on Katy Baby’s bow.  My radio squawked suddenly, rudely…

“All responders on the water”, it began, “remember, the flood waters are extremely toxic.  E-coli has been verified along with other diseases. Raw sewage and any chemical you can think of is likely in that water.  Avoid contact and do a full de-con before returning to the staging area.”

My stomach turned… thanks for the reminder, I thought, as a bit of water slipped down the oar and onto my hand.  I turned the volume almost all the way down as the person on the other end started listing out a barrage of symptoms to watch out for.

Reaching the first confused intersection stoplights, and stopping a moment (likely out of habit), I took a right turn past a submerged Shell gas station, it’s pumps vacant and lonely, and towards the entrances to the subdivisions.  The sun was setting and the brilliantly deep orange that Texas sunsets are so known for had begun to cast its glow across the flooded landscape… remarkably beautiful and bittersweet.  I felt a wave of guilt wash over me as I admired the scene for a moment.  This was no time for sunsets… in fact, the setting sun was an ominous reminder that my time on the water that day would be short lived and that I needed to move fast.  I dug my oar in.  The moment that night fell, the neighborhoods would be creepy crawling with armed looters who wouldn’t think twice about pulling a trigger and the streets filled with police officers tasked with seriously enforcing a curfew, regardless of my rescuer status.

Katy Baby glided down the street, avoiding half-sunken cars and at times scraping and getting stuck on unseen objects or shallow medians, but always pulling free, taking the beating in stride as she surged on with purpose.  She could have been headed for the Colorado River or perhaps a beautiful, clean alpine lake… a bottle of champagne in the hand of her new operator.  But her destiny was this… and me.  Marked not for clean water and bubbly alcohol, but for dirty water and work…a heroic maiden voyage and purpose.

A jet ski sped by, rocking us in its wake, but Katy Baby stayed steady as we made the final stretch to the entrance of a subdivision, its brick walls crumbling and the iron gate pushed forcefully to the side, standing purposeless and, like the stoplights, somewhat confused.  We passed through the sleeping entrance and my stomach dropped as the full destructive power of Hurricane Harvey came into view.  The water at that point was at the front doorsteps of the homes, but you could see the water line another six to nine feet up, marking how deeply this neighborhood had been submerged.  There were sunken cars, downed trees, worrisome live powerlines, belongings and garbage scattered everywhere… and it was bereft of life.  No people calling for help, no people on their porches, no animal or human life… anywhere.  The houses were ghosts of a once beautiful neighborhood thriving with life and it felt as if they sadly stood guard, waiting hopefully for their owners to return.  But somewhere in this neighborhood, there were people still… and Katy Baby and I were going to find them.
It was hard to not enter a trance-like state as we navigated the streets, surrounded by devastation that almost took on the quality of a gallery of abstract art created by mother nature herself.  But my burning muscles were keeping me in the moment and the new cramps and pains starting to creep across my body from sitting so awkwardly was giving me a further sense of urgency.  Sweat poured down my face from below my helmet and my head was spinning from the heat and humidity.  I very, very carefully picked up my water bottle and took a drink, being extremely careful not to get that flood water near the opening or my mouth.  Must go faster, I thought and dug my oar in once again.

We went down street, after street, finding no one.  The sunset was turning to dusk and Katy Baby and I were starting to feel defeated.  She, maybe a little slower, a little shakier… no telling whose fault… but the sense of failure was creeping into both of our guts and the decision of having to bail out on the mission was quickly approaching.  I patted her bow again.

“No matter what, you did good today Katy Baby…”

I said to her out loud.

“You were destined for great things and this dirty water will always be where we choose to sail.”

And then… I heard something.  I looked down the cul-de-sac to my right and there at the end was a group of people waving to me and calling out.  I slammed my oar into the water and Katy Baby cut hard to the right.  The stranded group threw their arms up into the damp and heavy air and cheered.  I could feel Katy Baby surge with her purpose again and it flowed from her belly and into my oars, through my muscles and then deep into my bones.  And as the sun finished setting across Katy, Texas, me and Katy Baby glided steadily to the rescue.

Namaste! Welcome to my Blog! My name is Brad. Creatively, I am a writer, an artist, and a musician. Professionally, I am a remote medic and a wildland-firefighter. At my core, I am an adventurer, an explorer and a traveler with a primal voracity for the road. We are defined, good or bad, by the roads we choose in life and I am here to creatively lay before you my roads and my experiences on them, so that perhaps you may also see your own candle lit karmic pathways of truth. And who knows, maybe i'll nudge you down a road you've never taken before... or maybe it will be you that nudges me. 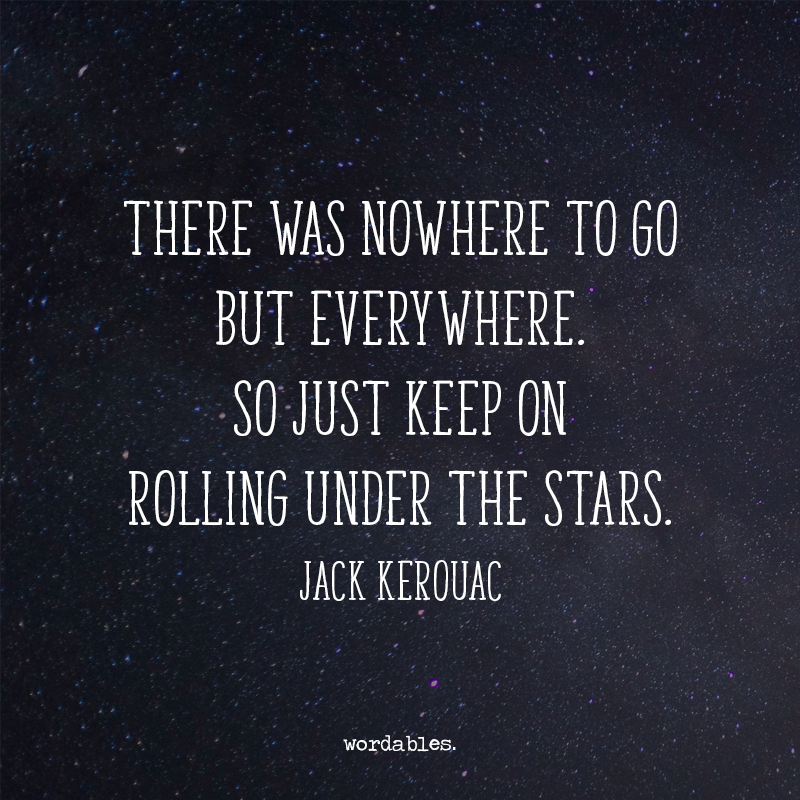